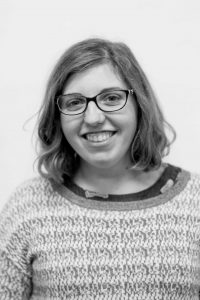 Sarah Cattley is an award-winning composer based near Cambridge, where she studied Music at Newnham College. Sarah was Caritas Chamber Choir’s Composer of the Year 2017–18, after winning their inaugural composition competition. During this time she wrote them four new works, and she is fortunate to have enjoyed a close relationship with the choir since then. Her music is available on their two CDs.

In 2019, the London Festival of Contemporary Church Music commissioned Sarah to write a set of Preces and Responses, which were premiered during the festival evensong and broadcast live on BBC Radio 3, conducted by Christopher Batchelor. In the same year, she was joint winner of the National Centre for Early Music’s Young Composer Award, with her piece Dream Fever for bass viol and electronics, which was recorded for Radio 3’s Early Music Show by Liam Byrne, and has since also been broadcast on Resonance FM.

The third volume of Multitude of Voyces’ anthologies of sacred music by women composers includes Sarah’s carol Ivy, Chief of Trees it is, and her Fitzwilliam Service is published by Selah Press in their Sarah MacDonald Choral Series. Sarah was delighted to be commissioned by Stainer and Bell to write a commemorative piece for the 2022 celebrations of Ralph Vaughan Williams’ 150th birthday. Her piece O Western Wind … An Anniversary sets a poem by Ursula Vaughan Williams.

Sarah is very inspired by people and events of the past; previous pieces have been about Charlotte Brontë, echoes of Monteverdi’s music ringing round a Venetian basilica, and the suffragist links between composer Hubert Parry and Newnham College. She also creates poetry to be set to music, both for her own use and for composer Janet Wheeler.

One of the (main) reasons the UK has been a world leader in music for the past 70 years is the #BBC. If it's turned into a PBS-style shell of its former self, it won't commission new works, won't provide music education online, won't support emerging artists & all these will go:

Remember during the lockdowns when the BBC offered the biggest educational programme in its history? It ensured that even children who couldn’t access the internet could view curriculum-based programmes. It wasn’t commercially viable, it was extraordinarily valuable.

Wishing everyone a safe and happy Festive Season 🎄To get you in the festive mood, have a listen to this beautiful carol, Ivy, chief of trees it is, by @Newnham_College alumna @sarah_cattley 🎶 https://t.co/6nPPCFpugF via @YouTube