Orkney Camerata marked the centenary of Orcadian poet George Mackay Brown in 2021 with their project Words into Music: Continuity and Change in collaboration with the George Mackay Brown Fellowship. In the first phase of the project, writers were invited to submit poems and short pieces of prose, which composers were invited to respond to musically in the second phase. Sarah’s piece Whale by Whale is a response to Jane McKie’s beautiful poem of the same name which can be read here.  Selected composers were given a mentoring session by Gemma McGregor before the nine works, including Whale by Whale, were premiered by players from Orkney Camerata at St Magnus Cathedral on 22nd May 2022.

Programme Note
This piece takes as its inspiration Jane McKie’s beautiful poem of the same name. The three stanzas are mirrored in three musical sections. The piece opens in an introductory fashion as we meet the ‘three islands rising from the choppy blue’ which turn out to be three whales, loosely represented by the three block chords, Db major, F major and Ab major. The middle section is more active to replicate the ‘rise and roll’ of whales hunting. The third section harks back to the first as a sort of remembrance as the whales depart – the ‘three islands slip, invisibly. And in their place, a longing.’

On 5th May 2018, Newnham College held an event to commemorate the rediscovery of a portrait of Hubert Parry in the attic, and this piece was a commission premièred at the concert. The middle section of the piece quotes a song by Parry called You’ll Get There, a setting of words by the Trent Otter; Millicent Fawcett, one of Newnham’s founders, quoted the second verse of the poem in her book The Women’s Victory and After.

The National Centre for Early Music asked participants of their Young Composer Award 2018 to write a piece for sackbuts and cornetts, taking some form of inspiration from Venice. This piece was selected as a finalist for the workshop and performance on 10th May, where it was played by the English Cornett and Sackbut Ensemble.

Programme Note
When thinking about Monteverdi working in Venice, I was struck by the fanciful image that echoes of fragments of his music might still be ringing round the tops of the domes in the Basilica di San Marco. The outer sections of my piece try to portray a cloud of background sounds in the basilica which is occasionally pierced by the remains of a little fanfare. This builds into a dance directly inspired by the Venetian polychoral style of pitting different groups of musicians playing on separate balconies against each other – a style which supposedly grew out of the acoustic properties of the basilica. The dance rhythm plays with divisions into two or three, again in homage to Monteverdi. This dance subsides again into the muddier music of the opening section, now more thickly textured and punctuated by distorted variations of the same fanfare refrain. 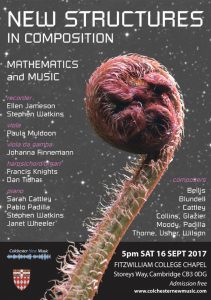 This piano duet was written for Colchester New Music’s New Structures in Composition project, using an algorithm to set Robert Herrick’s poem A Ternary of Littles instrumentally. It was performed in September 2017 in Fitzwilliam College Chapel.

Composer’s Note on the Algorithm
The process I chose was that of setting a poem instrumentally according to its vowels. The suggested method was to assign each of A, E, I, O and U a set of pitches and choose a note from the set randomly each time a vowel is used in the poem. However, since poetry is about language as it sounds, rather than as it is written, I decided to make a new system according to vowel sound rather than spelling. I used Wells’s list of vowel sounds to identify fourteen different vowel sounds in Herrick’s A Ternary of Littles, and mapped them onto the poem. The first time a new vowel appears, it is given the lowest available number. I then created my sets of pitches – major triads ascending chromatically, so 1 is C E G, 2 is D flat, F, A flat, 3 is D, F sharp, A, etc. After that it was simply a process of threading them into little melodies, choosing one of the available three pitches for any incidence of the number. I decided to keep the rhythm steady to mirror the way one would read the poem; an aspect of my vowel system was that it fitted the poem syllabically, where a spelled system would not (for example, in a spelled system the word ‘boat’ would give two notes rather than one as it contains two vowels even though it is only one syllable). Another way in which I tried to stay as close to the poem as possible was in my treatment of the first two lines of each stanza. The first and second lines of all but the last stanza all end ‘fits a little [noun]’ or ‘best fits a little [noun]’, so within these verses the first and second lines end with the same string of notes.

There are many tales in folklore of fairies or elves stealing a human baby and leaving one of their own offspring, a changeling, in its place. In this piece the restless and more rhythmically-driven outer sections surround an other-worldly lullaby, which should be played quite freely. The effect should be as beautifully expressive as possible, yet also sinister.

The music begins from afar, looking on at a royal procession from a long way away, or possibly looking backwards from a long time in the future. As the procession becomes clearer, it alludes to aspects of Renaissance dance, most notably the Pavane. This is followed by a section in triple-time, in deference to the more athletic Galliard, which was often danced after a Pavane. Eventually, having done much walking and dancing, the exhausted company disappear once more into the distance.

Kite (2’30’’) depicts the flight of a kite; the wind builds up through the beginning section with the clarinettist blowing unpitched ‘gusts’ until the kite has enough momentum to take to the air, bobbing around for a while before soaring off at the end.

Pentagon (1’30’’) is based around patterns of five – the pulse is in five, the phrases are built of five bars, and the harmony is based on perfect fifths.

The slight irregularities of pulse and harmonic shifts in Trapezium (1’40’’) are intended to represent the slanted ‘wonky’ look of a trapezium.

This trio was first performed in Newnham College’s Music for the Festive Season in 2014, and received its second performance in Haywards Heath in May 2017, where it was described as a ‘powerful, toccata-type piece’.

Written on the 2013 Sound and Music Summer School at the Purcell School. Sarah was part of the Instrumental Composition group, tutored by David Horne.

Members of the Britten Sinfonia performed this quartet in a Music Nation gala concert in Saffron Walden in March 2012 as part of the London 2012 Festival.

A beautiful venue for the final concert of our 21-22 season, and a celebration of RVW: Mass in g, Lord thou hast been our refuge, Antiphon, O clap your hands. Plus Parry, Holst, @EricWhitacre, Weir, Skempton, Denis Browne, and Ursula VW settings by @sarah_cattley & Howells. Come! https://t.co/4KiOlu3rDD

So grateful to write for 2 world-class musicians and 2 brill festivals for #RVW150 - thank you Thaxted, Paxton, Roddy, Susie & RVW Trust for a dream bucket-list commission! Hoping my songs do justice to Frances Cornford's beautiful words & can't wait to hear them brought to life!

Beautiful songs by @sarah_cattley, with texts by RVW's cousin Frances Cornford and support from @RVW_Trust, will celebrate #RVW150 in July. Premiere on Saturday @ThaxtedFestival and then @musicatpaxton performed by the splendid @RGCWbaritone and Susie Allan.