The Robin Carol takes as its starting point the words of the nursery rhyme The North wind doth blow – ‘The North wind doth blow, and we shall have snow, and what will poor Robin do then? He’ll hide in a barn and keep himself warm, and hide is head under his wing’. However, in a departure from the nursery rhyme, the robin sings ‘Nowell’ while he is sheltering from the cold. Later the piece draws parallels between the robin’s need for shelter and humans’ desire for protection, using a plainsong quote from compline: ‘Hide me under the shadow of your wings’.

Sarah is thrilled to be one of six composers participating in Psappha’s Composing For Piano schemes in 2021-2022, writing a piece for pianist Benjamin Powell. The composers will have three workshop sessions over several months, an intervention day and a final recording session in May.

O Western Wind: An anniversary
This was our world’s end day, dear love,
An end of time but not of tears,
The end of touch, the silenced word,
The first day of our separate years.
When will time end for me, dear love,
Or end for both in darkest night,
Or shall I find, in that unknown
Your hand is mine, and mine your own?
Sarah’s setting is now available from Stainer and Bell as part of their Choral Now series, and hopefully will be of use to choirs planning to mark the anniversary next year. 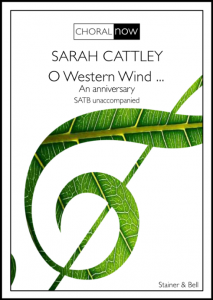 The specially-recorded video of Charlie Pemberton and Sarah MacDonald’s beautiful performances of Sarah’s The Garden in Spring and Janet Wheeler’s Said a Blade of Grass has now been released on YouTube.

Multitude of Voyces published their third volume of sacred music by women composers in November 2020. Sarah is thrilled that her carol Ivy, Chief of Trees It Is features in the anthology alongside so many wonderful pieces by women composers historical and contemporary.

Sarah, along with fellow Newnhamite and MazeMusic composer Janet Wheeler, was delighted to be asked to write a song for a recording session for Newnham College’s Alumni Development Office. Soprano Charlie Pemberton, a choral scholar at Newnham, and pianist Sarah MacDonald, Director of Music at Selwyn College, constructed a programme with a garden theme. The recording took place in Newnham’s Old Labs on 1st September.

Janet Wheeler’s song sets Khalil Gibran’s Said a Blade of Grass. Sarah’s song, The Garden in Spring, sets part of a poem by Fredegond Shove, a poet who attended Newnham during the 1910s. Fredegond Shove had two collections of poetry published during her lifetime; she was a relation of Ralph Vaughan Williams, who set four of her poems as songs. Unfortunately she is now very little known.

Hale Sterne Superne is a setting of three verses from a Scots poem in praise of Mary by William Dunbar. The poem has a fantastic lilting rhythm that just leaps off the page when you read it, which made it a real pleasure to set to music.

Composer Benjamin Tassie hosts Future Renaissance, a radio show on Resonance FM dedicated to contemporary music for early instruments. The final episode of this series aired on 30th July, and began with Sarah’s piece Dream Fever for viol and electronics, played by Liam Byrne, alongside music by Jo Thomas, Sarah Angliss and Marianne Schuppe. Every episode features an eclectic mix of the beautiful and the wacky, as well as insights from a different interviewed guest. The whole series is available to listen to again on Benjamin’s website, here.

So excited for this tomorrow! As well as premiering my piece, we'll be performing lots of lovely #RVW and unveiling what he got up to during his time in Saffron Walden - all in the very building (@SMMAsw) where he came to play the organ! 🤯🎹 @GrantaChorale @RVWSociety @swtic

Us mere moments before the #RoyalOperaHouse #PeterGrimes reduced me to a snivelling wreck. What a piece and what a production. Thank you @jhumbles for the tickets and for letting me cry at you.