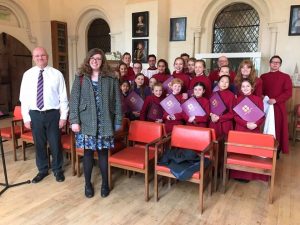 Ripon Cathedral held a New Music Week in May, during which they celebrated church music written in the last fifty years. Sarah’s Prayer of Richard Rolle opened the week’s focus on new music, being sung by the choir, as part of the sermon in the Sung Eucharist on Sunday 13th May.

Newnham College held an event on 5th May to celebrate the rediscovery of a lost portrait of Hubert Parry which had been found in the attics. Sarah was asked to write a short chamber piece to form part of the concert. Her piano trio To See The Light Of Day: Music For The Rediscovery Of A Portrait quotes Parry’s song You’ll Get There, a setting of words by the Trent Otter (the pseudonym of J.W. Martin, who wrote for The Fishing Gazette). Millicent Fawcett – Parry’s close friend and one of the founders of Newnham College – quotes the second verse of the poem in her book The Women’s Victory and After, so the song provided a musical link between Parry and the college. The piece was premiered by Sophia Ramnarine (cello) and Susanna Alsey (violin) with Sarah at the piano, and together they also played the second movement of Parry’s own Piano Trio in B minor. Voices of Newnham sang You’ll Get There before the premiere.

Sarah had discovered the song in this BBC Radio 3 clip, presented by David Owen Norris, who very kindly provided Newnham with the sheet music for You’ll Get There. 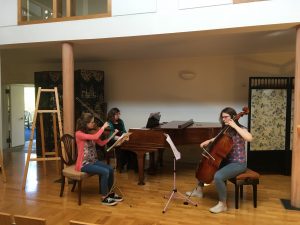 Sarah wrote The Basilica Remembers A Maestro for sackbuts and cornetts as an entry for the National Centre for Early Music Young Composers Award 2018 and is delighted that it has been shortlisted. The brief was to write a piece for the English Cornett and Sackbut Ensemble, taking inspiration from Venice; Sarah’s piece is influenced by Venetian polychoral style, Renaissance ornamentation and Monteverdi’s use of dance rhythms. The shortlisted works will be presented in a workshop led by composer Christopher Fox in York on 10th May, before a public concert that evening in front of the judges.

Sarah’s Pentecost motet, Factus Est Repente, has been selected for performance in 2018’s London Festival of Contemporary Church Music, and will be sung as the motet in Solemn Mass in St Mary of the Angels, Bayswater, on 20th May. This will be the piece’s fourth performance, and its London premiere, after its first performance in 2016 by the Chapel Choir of Fitzwilliam College Cambridge, and two performances in 2017 by Granta Chorale (one in Ely Cathedral Lady Chapel and the other in Saffron Hall).

Sarah’s setting of Sicut Cervus has been shortlisted for Buckfast Abbey’s Young Composers’ Competition. The competition forms part of a nine-day Festival of Sacred Music in April, which commemorates a thousand years since the Abbey’s foundation; Sarah wanted to reflect this long history in her setting, which references monastic chant and church modes. All the finalists’ pieces will be premiered on 19th April alongside the first performance of Matthew Martin’s new commission setting the same text, Sicut Cervus. 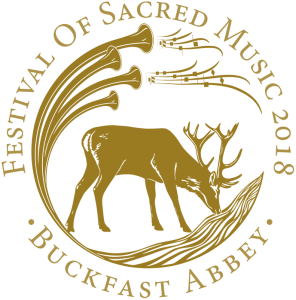 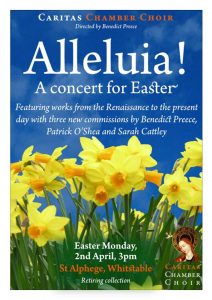 Caritas Chamber Choir, who commissioned Sarah’s Haec Dies, give the first performance in St Alphege Church on Easter Monday before taking the work on their tour to Sweden.  Sarah’s setting interprets the celebratory text with fanfare-inspired melodies and aleatoric sections.

So excited for this tomorrow! As well as premiering my piece, we'll be performing lots of lovely #RVW and unveiling what he got up to during his time in Saffron Walden - all in the very building (@SMMAsw) where he came to play the organ! 🤯🎹 @GrantaChorale @RVWSociety @swtic

Us mere moments before the #RoyalOperaHouse #PeterGrimes reduced me to a snivelling wreck. What a piece and what a production. Thank you @jhumbles for the tickets and for letting me cry at you.